The best thing about Palermo street food is how many different tasty things you can try, and its all a bargain! (if you know what to look for!) 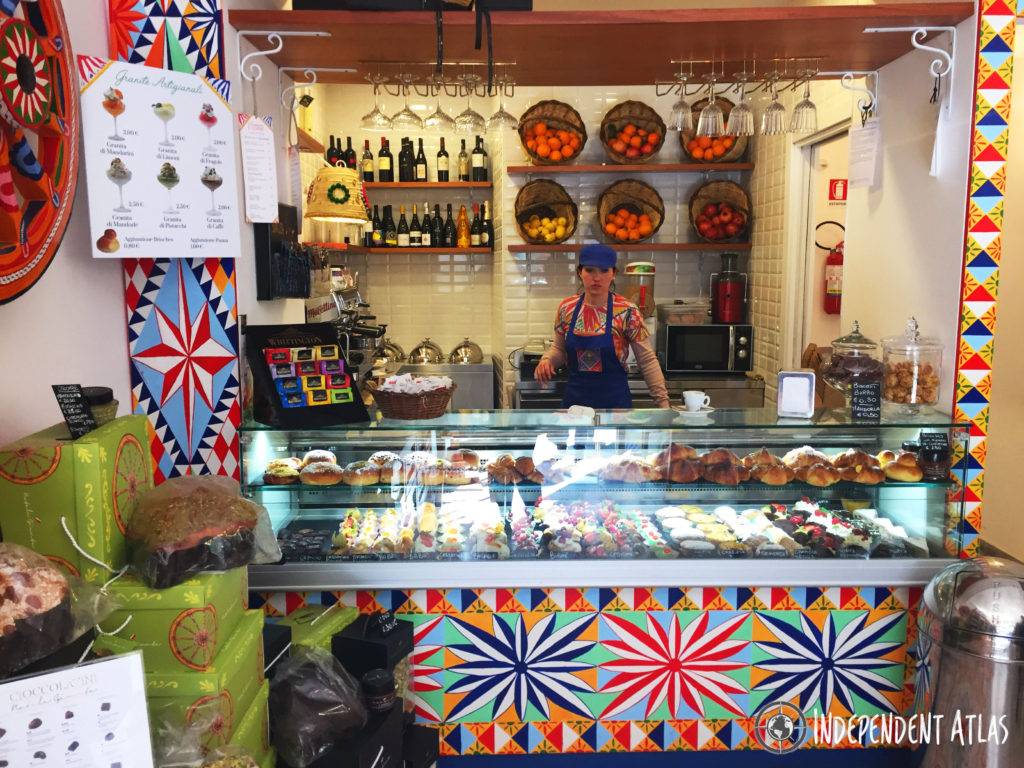 Having spent one month in Palermo we have put together a guide to the street food in Palermo so that you get to experience the best quality for the best price.

Sicilian street food and Palermo street food in particular, may well be the thing we miss most about Italy. Though it is not quite Granada, Spain in terms of free food, nevertheless, Palermo gives Granada a good run for its money with an impressive array of aperitivo and snacks at €2 or less a go.

Palermo street food is everywhere. The food is incredibly tasty. Restaurants spill customers all over the streets. It is overwhelming to begin with, and you do get worried that you may accidently be wondering into someone’s living room, but actually, knowing the Palermians we have met, they probably wouldn’t mind that!

So let’s get started with the Palermo street food that you simply cannot miss.

The markets: A great introduction to some of the street food in Palermo.

Everyone knows that Palermo is famous for its street markets, but Ballaro market and Vucciria market seem to get the most attention. Ballaro is international, loud and full of life, and packed with ingreadients from all over the world. Vucciria (in the day time at least) is smaller and calmer – however it is now more legend than market. Capo market, just down the street from the apartment we stayed in, in the old town, is the real deal, an authentic Arabic market set on narrow streets full of colour, shouting and all of the smells. 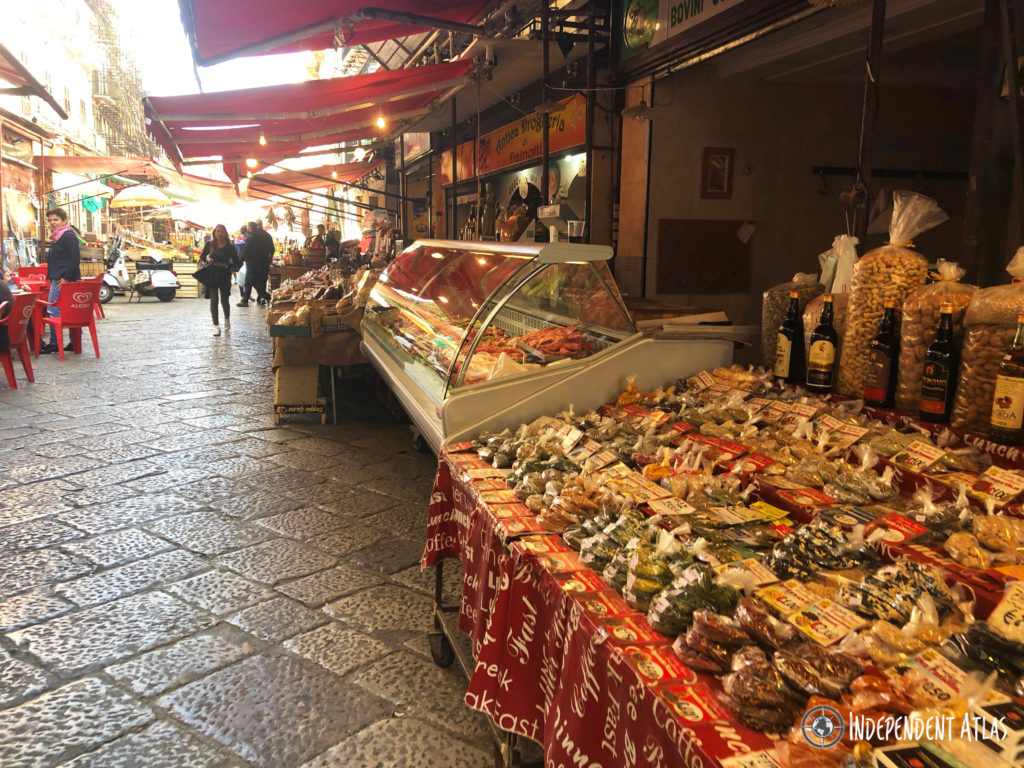 The fresh fish in Palermo and especially in Capo market is plentiful. Queues for arancini run back down the street at the weekend. The fruit and veg sellers tempt you with the biggest oranges and lemons you will ever see and the sweet smell of fresh strawberries tangles with the aroma of muddy roots dragged from the fertile Sicilian earth.

On a side note - Palermo itself is a rollercoaster of smells. You will delight in the crisp, sweet smell of ripe fruit and veg one minute only to be overwhelmed by the golden scent of warm baked bread tempting you around a corner. Then, just as you breathe deep to inhale the wonderful smells again you’re knocked back by the overpowering smell of drains or rancid fish guts. It’s a real experience for your senses, your nose may never be the same again. 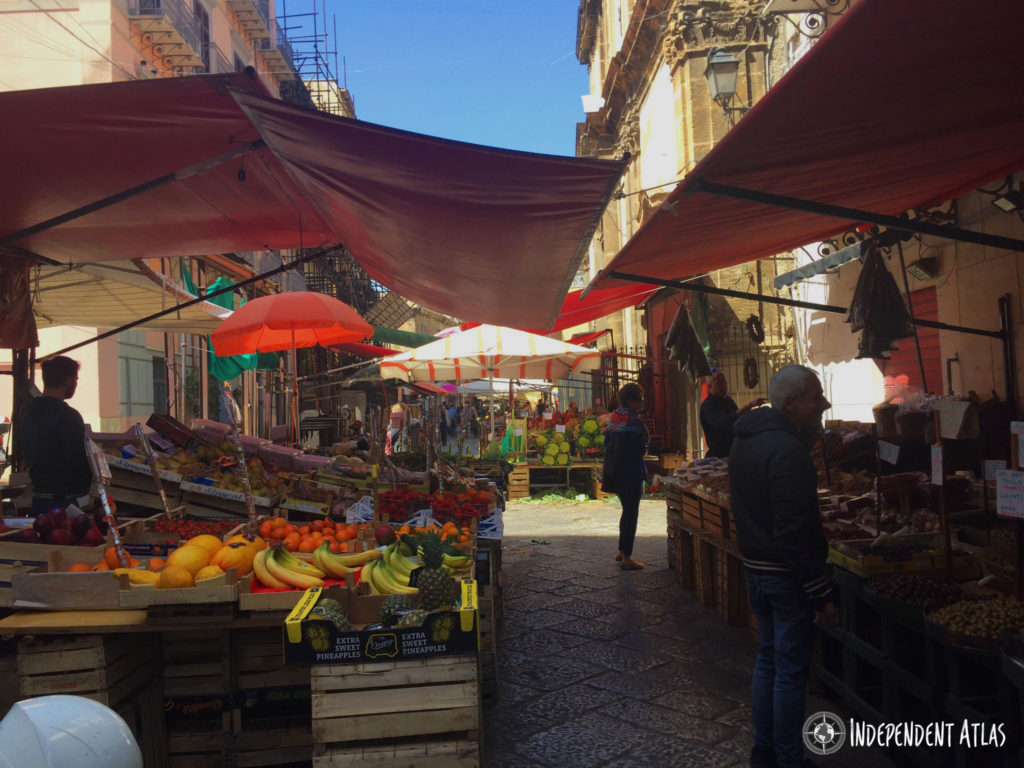 The produce of Palermo markets (forget about the smells) is so delicious, fresh and inexpensive, it’s worth renting an apartment rather than a hotel, (and cheaper…see here on our budgeting for travel page) purely so you can use these fresh ingredients to cook for yourself.

The best street food in Palermo. 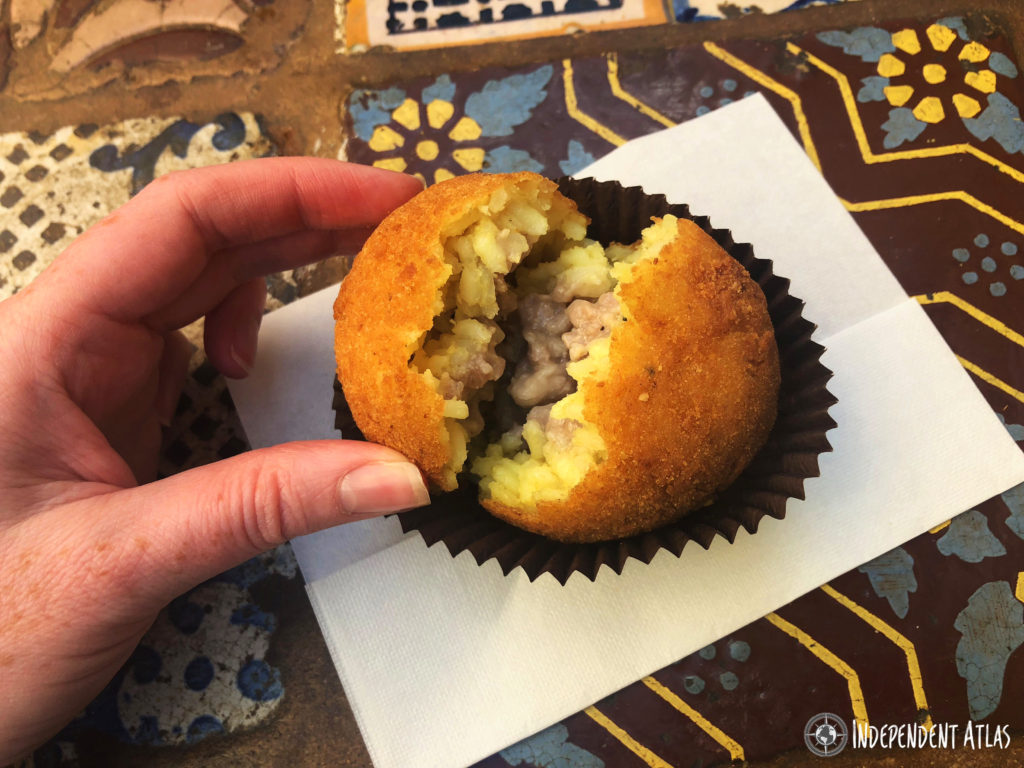 We may have eaten more than a few of these...

Creamy risotto rolled into a ball, stuffed with some sort of cheesy or meaty mixture, breaded and deep fried. It literally tastes like heaven. Arancini is everywhere in Palermo but if we are honest 50% of it is awful. The 50% we are talking about tend to come from tourist traps where you are presented with a dry, overcooked, paste like ball of rice that is cold in the centre because its just been thrown in the microwave. These tourist traps will charge up to €4 and trust us this is no experience of Palermo street food at all. Find yourself an arancini away from the tourist spots and the high streets. They can cost as little as €1. You will thank us later. 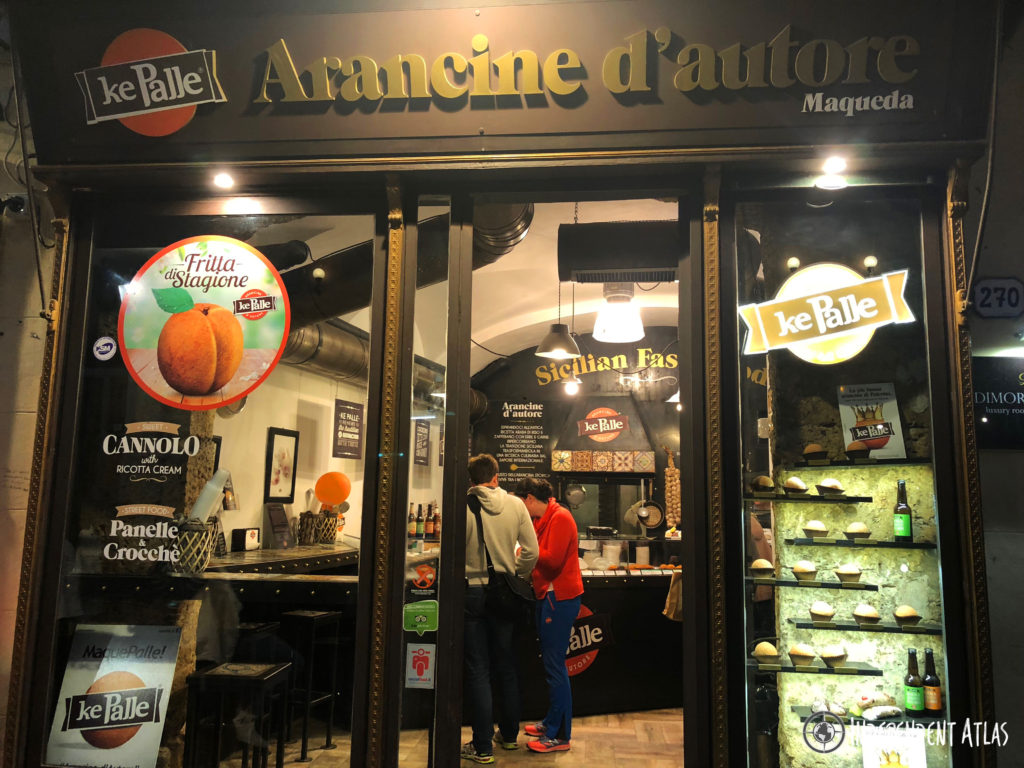 The best arancini in Palermo we say!

There is however one exception to the high street rule Ke Palle on Via Maqueda – This place is definitely not a secret, but we did stumble upon it by accident. Ke Palle is dedicated to arancini and home to the most delicious combos of arancini ever! We counted 15 different flavours and it’s also a total bargain compared to some places. €2 for an arancini filled with some kind of bbq’d ribs – yes please. Suffice to say, we have been regulars. You will be too.

The taste of heaven!

You cannot go to Palermo and not eat a cannolo. (in fact the singular word cannolo is never used for this very reason) You simply have to try at least one. If arancini is the king of savoury street food in Palermo, then these guys are the Queens of sweet. Cannoli are a delicate, light, crunchy cylinder made from of what you wish brandy snaps tasted like; and filled with what can only be described as the cream of the angels (Picture cheesecake, crossed with butter icing, crossed with cream and you may be somewhere close). This is the kind of desert you will dream of late at night, when you think back on your time in Sicily.

Cannoli are best enjoyed while basking in the glorious Sicilian sunshine. If you get the chance, try the original flavour and then go back for the chocolate tomorrow.  Some places let you have a half and half (us Welsh love a half ‘n half!). The most authentic establishments will pipe the creamy ricotta cheese filling into the tubes in front of you. Delish. 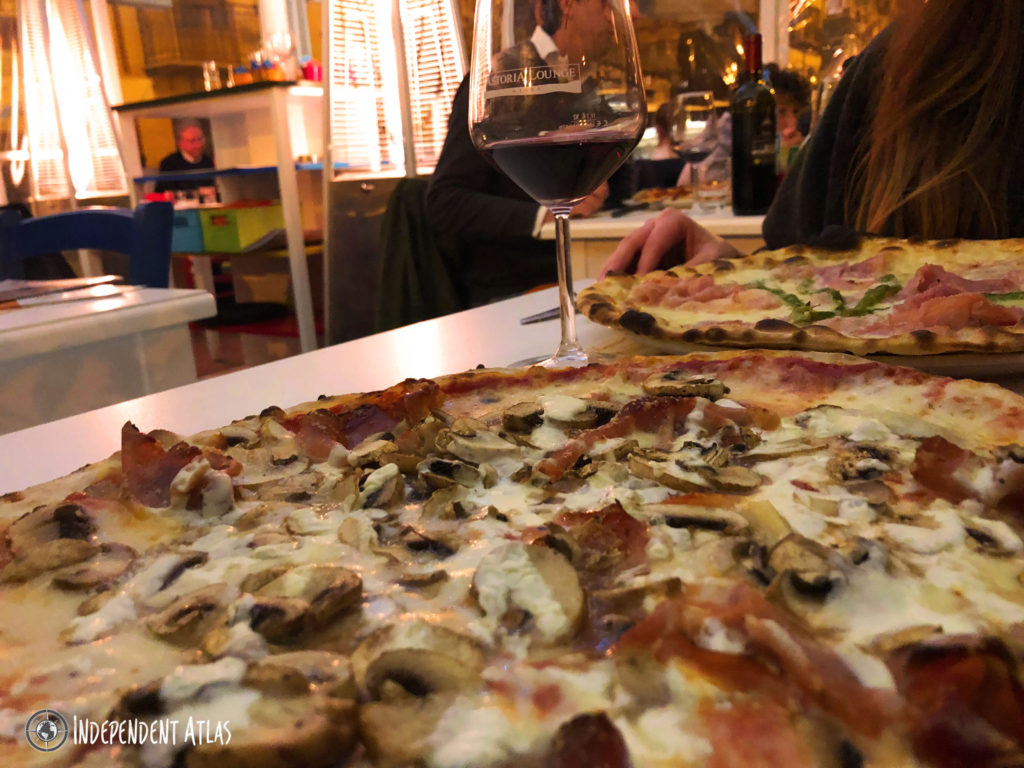 Some pizza in Palermo is so good it will make you cry and you won’t care who sees. Fact. Some pizzas though, leave a lot to be desired. This is one of the most varied types of street food in Palermo, not just because the toppings change, but because they use so many different types of dough and cooking techniques – no two pizzas are the same. Buy a slice of sfincione (tomatoes, anchovies cheese and white onions a speciality of this part of Sicily) big enough to share as you wander through the streets or try a whole pizza in one of the many fantastic trattorias.

As mentioned before, beware tourist trap restaurants which charge an arm and a leg for a load of rubbery crap, or don’t allow two people to share a pizza. Instead, head to a trattoria a little off the main streets and don’t be afraid to delve into some of the places in little alleyways. We found that some of the best restaurants in Palermo are tucked away down side streets and if you find the right one where the majority of the customers are speaking Italian, then you’re on to a winner, and you will enjoy fantastic service, cheaper more delicious fare and much better wine prices. 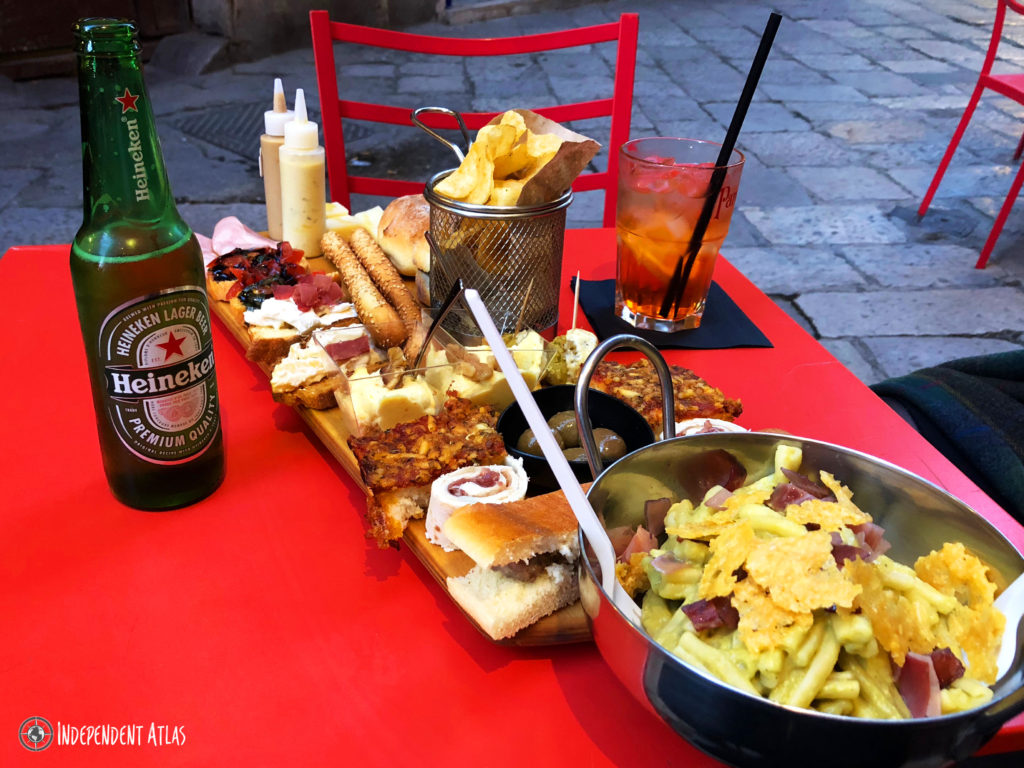 All that food and a drink for just ‎€10 each - Vespa Cafe does it right!

We’ve written a whole article about aperitivo (here). Though it isn’t necessarily a street food aperitivo is an unmissable part of any Italian holiday. The aperitivo is intrinsically linked to ‘la passeggiata’ – the wonderful Italian tradition of taking a stroll before dinner or “Andiamo a fare qualche vasca!”  which roughly translates as doing a few laps! Stick on your favourite outfit and head down to Teatro Massimo to people watch at around 7pm and soak up the carnival atmosphere of this fantastic Italian ritual.

Much like tapas, aperitivo isn’t supposed to stop you from eating dinner but rather whet your appetite before your main meal. As with tapas however, more often than not the aperitivo from most restaurants in Palermo will render you unable to indulge in that enormous dinner you were eyeing up as the portions are generally huge. 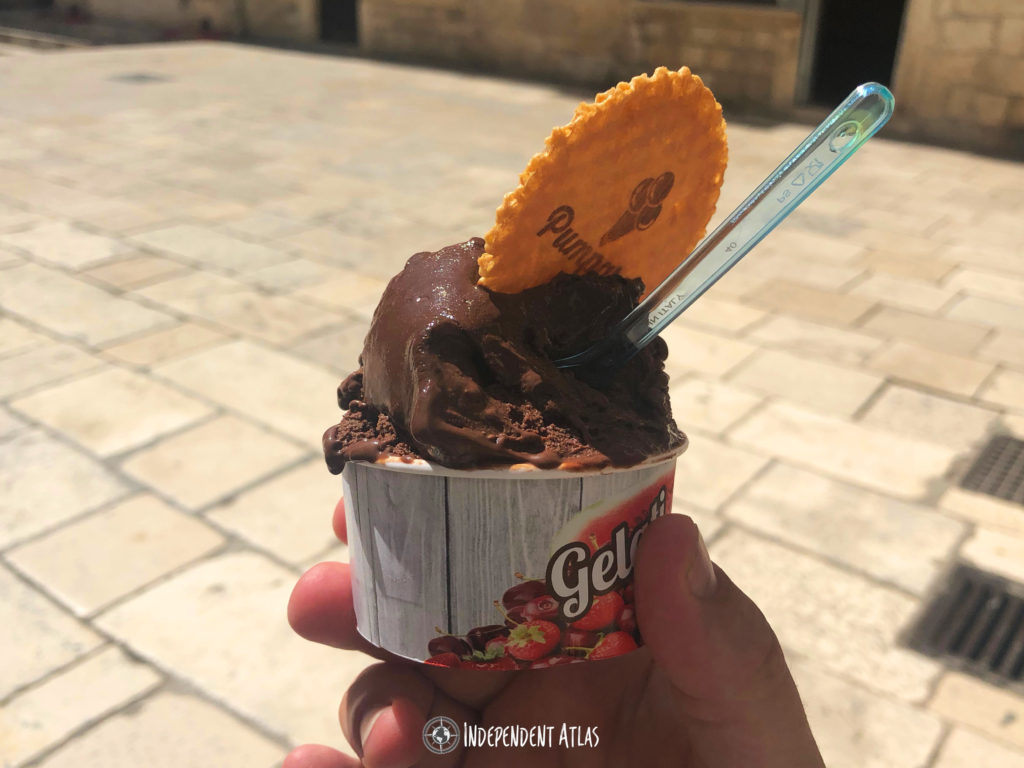 Sicily’s speciality is gelato so of course it ended up on our list of street food in Palermo. Any gelato is amazing here. Believe it or not, Gelato actually has less calories than ice cream! And it doesn’t really melt! Why is ice cream even still around?

If you want to go even more native, try gelato in a brioche roll. Oh yes, you read correctly. Ask for “Gelato con brioscia” This is all of your sugary sweet carby dreams come true and once you give it a try, a cardboardy wafer cone just ain’t gonna cut it no more. Also try Sicilian lemon (obviously) and allll the chocolate flavours, we counted more than 6 different chocolate flavours in one place. We’re talking cioccolato fondente (dark), all’arancia (orange) con pepperoncini (spicy) stracciatella (vanilla and choc chip) and gianduja (basically Nutella but was cool way before Nutella was born) and good old con latte (milk chocolate)

Where to go for street food in Palermo?

We read an article which said that Palermo shops and bars open up and close down very quickly because they Sicilians do not make loyal customers. We’ve met lots of people here and they all seem lovely and definitely loyal. If you buy from one market vendor they will remember you the next day! So is it really the Sicilian people that aren’t loyal?

We have another theory.

After a particularly indulgent evening signing along to Nirvana at Vucciria market (night parties and bbq food every night), we ventured out to the corner shop for supplies (fizzy sweets and ice-cold water) we spoke about how much we wanted a gelato but had no energy to walk to a busier part of town.

As we walked out of the shop and back down our quiet cobbled street we noticed a giant cornetto cone in front of a tiny shop. The man inside was 209 years old. There was a parrot in the corner of the shop squeaking erratically. We shouted our orders over the parrot and pointed wildly to the gelato we wanted. It was easily the best gelato we tasted in Sicily! 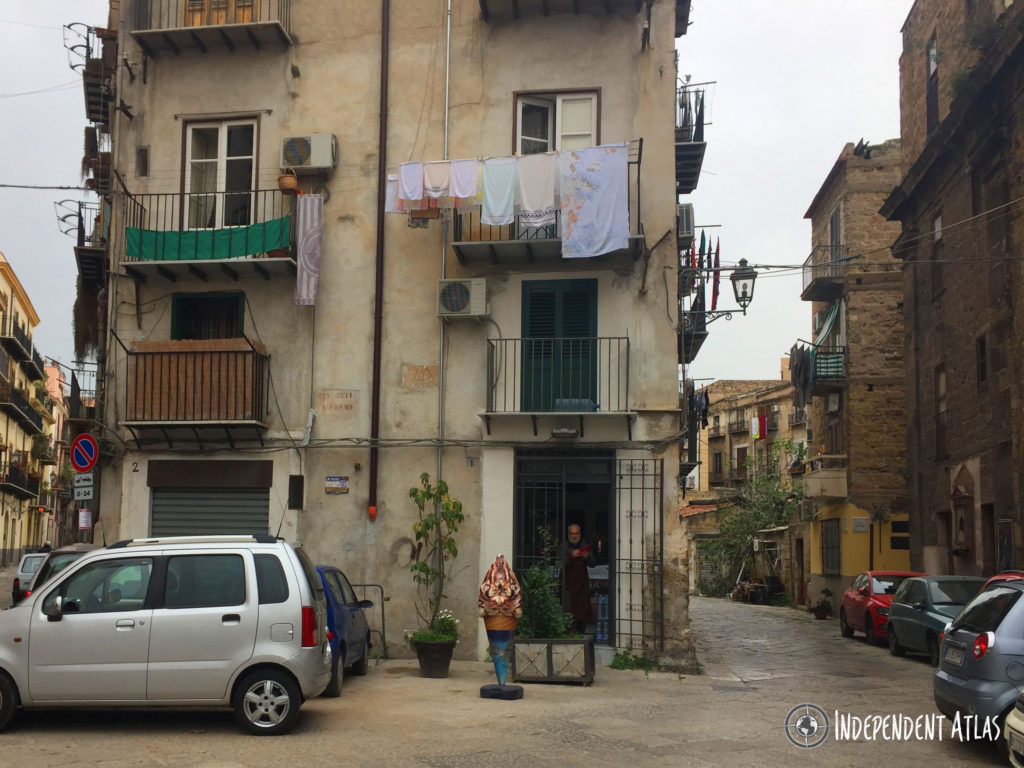 Never to be seen open again...

We admonished ourselves – “Oh no we’re going to have to pass this place every day and resist the temptation to eat it” (always a difficult thing for both of us). But alas, we never had the chance. It hasn’t been open since and we have been past at all times of the day and night. In our conclusion - we’ve found irregular opening hours and lack of signage to be a problem (for uninitiated visitors like us anyway) maybe this is the real reason many shops struggle with loyal customers.

So we won’t tell you exactly where to go for street food in Palermo – there are too many choices and it’s so exciting to explore. So our advice is: avoid the tourist areas, don’t let funky smells put you off (although if the food smells off use your common sense), if it’s full of Sicilians it’s going to be good and cheap definitely does not always equal bad quality in Palermo.

And although great places close down every day, new and different amazing places arrive in their wake, because street food in Palermo will never die!

Want to save this post so you can refer back to it on your adventures? Click Pin It on the image below to add it to your Pinterest. 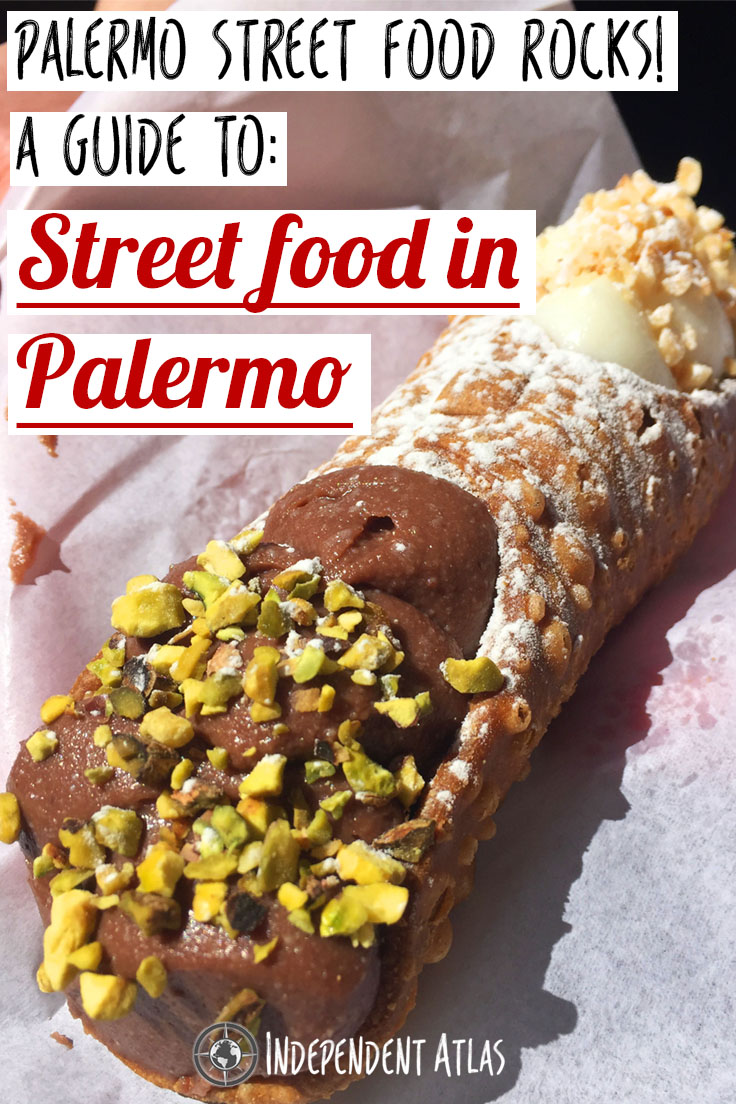 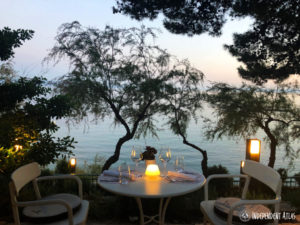 Finding the best restaurant in Split was a bit of a challenge, but I definitely think we found it. With the vast number of restaurants that Split has to offer, ranging from traditional food of the Dalmatian Coast, the freshest local fish, restaurants dedicated to barbecued meats of all varieties and wine bars stocked with [Read More…] 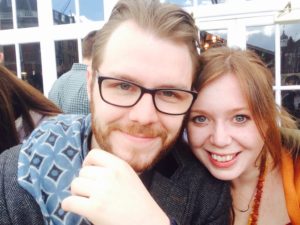 There has been a problem with your Instagram Feed.
Error: No posts found.